Bangladeshi photographer and activist Shahidul Alam reacts as he is released from Dhaka Central Jail, Keraniganj, near Dhaka, on November 20, 2018, after he was granted bail by the high court a few days prior. - Award-winning Bangladeshi photographer and activist Shahidul Alam was released from prison on November 20 after more than 100 days behind bars, in a closely watched freedom of speech case. The 63-year-old Alam was arrested on August 5 for making "false" and "provocative" statements on Al Jazeera television and Facebook during student protests. (Photo by Suman Paul / AFP) (Photo credit should read SUMAN PAUL/AFP/Getty Images)
11 Ottobre 2019 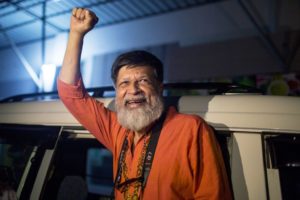